The Poitou Charentes region was made up of four départements – the Charente, Charente-Maritime, Deux-Sèvres and the Vienne. Like the majority of French departments they are named after rivers and date from just after the French Revolution of 1789. It has now become part of the larger Nouvelle Aquitaine region.

Poitou Charentes boasts some of the finest examples of French Romanesque art and UNESCO has classified six buildings along the pilgrims’ route to Santiago de Compostela on their World Heritage Site list. Dozens of historic small communities such as Chauvigny, Montmorillon and Parthenay offer an authentic slice of local life and culture. Six villages have also been ranked amongst Les Plus Beaux Villages de France.

The Romans came this way during the conquest of Gaul (i.e. France) from the middle of the first century BC and as ever they brought with them straight roads, villas, temples, theatres and baths.The specialities of the region include cognac, Pineau des Charentes (an aperitif made from Charente grape juice and cognac), Haute Poitou wine, numerous goats cheeses, Charentais melons, oysters from Marennes-Oleron, mussels, snails and much more.

Here are a few ideas of destinations that make ideal day trips out - there is something for everyone - the choice is yours. 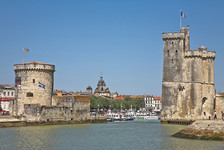 La Rochelle and Ile de Ré rank amongst the highlights of the French Atlantic Coast. A fishing village in the Middle Ages, La Rochelle is famous today for its beautiful Vieux Port, guarded by medieval twin towers. The Vieux Port is one of the most photographed harbours on France’s Atlantic coast - the colourful hub of a town packed with history and heritage, tempting boutiques and cosy restaurants. Easy to explore on foot, La Rochelle also operates a bike hire scheme with 160 km of designated cycle tracks. La Rochelle Aquarium, one of Europe’s largest, is home to 12,000 marine animals, whilst the floating Maritime Museum nearby includes a weather ship, trawler and tug boat.The historic old town features vaulted stone arcades and historic public buildings, as well as imposing private mansions from the 17th and 18th centuries. Visit the newly restored Natural History Museum and the Fine Arts Museum.

The name cognac is synonymous the world over with the finest French spirit but the town of Cognac was an important trading port for salt and local wine long before the discovery of the double distillation process that produced the famous drink. Take a guided tour of Hennessy and the town’s other major cognac houses or visit the fascinating Musée des Arts du Cognac.  Today more than 21,000 people work to produce and market 130 million bottles a year which are sold in more than 100 countries.

You’ll find more big name producers in nearby Jarnac and can meet producers of both cognac and the delicious pineau aperitif, as well as traditional craftsmen.  Pineau de Charentes is a liqueur wine made from three parts grape juice to one part cognac. Drunk chilled as an aperitif or dessert wine, pineau comes in two varieties - dry white and a fruitier rose.

Brouage and its citadel